Mr. “Uppity” John Cassidy Can Take His Phony Apology Regarding Sen. Ted Cruz And Shove It

Can you imagine the uproar if a conservative paper called a black Democrat candidate, “uppity”? Well the ultra-liberal elitist New Yorker magazine was caught doing just that — towards a Hispanic GOP senator,Ted Cruz.

Twitchy first reported on the gaffe, after one Twitter user highlighted the offending term in the New Yorker article by longtime liberal journalist, John Cassidy: 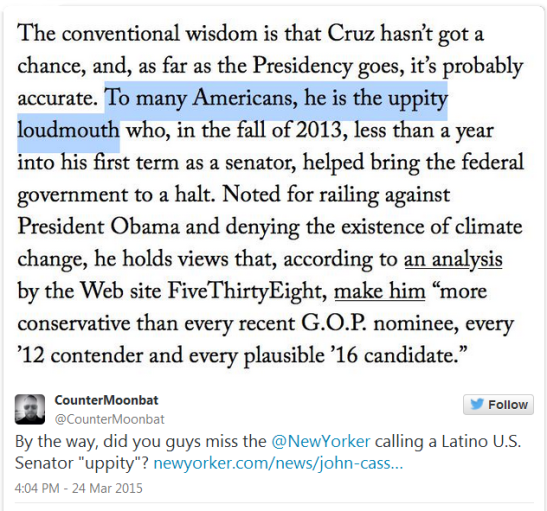 Cassidy later issued an apology for using the term, as he said, “inadvertently”:

Update: In describing Senator Cruz’s aggressive actions during his first year in the Senate, I originally used the word “uppity,” which means, according to Webster’s, “acting as if you are more important than you really are, do not have to do what you are told to do, etc.” However, the word also has some disturbing historical connotations that I overlooked, and in applying it to a Latino politician, I goofed. If I gave any offense, however inadvertently, I am sorry.” – See more at: here

Liberals always use their go-to word, “IF”, when they don’t mean “sorry” at all.  Their “if” can be correctly defined as, “if you stupid people” were offended . . . . oh well. His so-called ‘apology’ falls as short as he journalist credentials and ethical morality. But it is certainly typical of the braggadocious Liberal and his “tolerance” for others views.

The snake-venom crowd came out quickly, to attack Cruz. The only thing I’ve yet heard him called, is a Nazi, but no doubt, that will be drug out in due order. Many of these self-imposed-fools, actually believe that Conservatives are the bad folks, when their rear-view mirror should be pointed at themselves.

On the other hand, many of them are simply ignorant with no interest in becoming knowledgeable, and less becoming stupid. They completely embrace the liberal, spoon fed ideology and willing drown in liberal it. The thought of having principles to stand on, instead of their ‘feelings’, is abhorrent.

Equally as worse, if not a bit more so, are the so-called “conservatives” on FNC who were equally as fast to smear and ‘tsk tsk’ Sen. Cruz as “too far right” and “unelectable”, as they frowned their glares of disapprove into the camera lens. Cruz didn’t “shut down the government”, which correctly Obama did, but he made a principled, conservatives stand to draw attention and slow down Obama and the Democrats unconstitutional activities.

As for being ‘unelectable’ he might be — simply because America’s heart, soul and conscience has been so darkened in it’s acceptance of wrong and evil, that it might well, overwhelming reject the only thing that can save it: enacted Conservative, founding principles.

I like Cruz, much more than most other candidates, because he believes in conservatism more than others. Those who make me sick, are the phony conservatives who only talk principles to get elected. Common Core, amnesty and more massive spending, is not a conservative principle but an end around obstacles. I hate to watch the continue demise of America but the election of a soft, phony ‘conservative-lite’ and the Democrats would put the final nail in our coffin, much faster.