Hillary Clinton Jokes With Press About Her Corruption While Media Yawns . . . Or Applauds 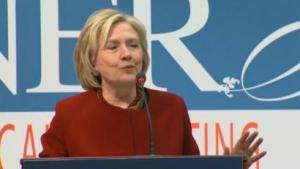 Me guilty? Of course! (chortle chortle)

Hillary Clinton: “I am all about new beginnings: a new grandchild, another new hairstyle, a new email account,” she quipped, “Why not a new relationship with the press? So here goes. No more secrecy. No more zone of privacy.”

The former Secretary of State joked: “Before I go any further, if you look under your chairs, you’ll find a simple non-disclosure agreement. My attorneys drew it up.”  She went on to say that, in a fragmented modern media world, Americans rely increasingly on reporters “to try to get us out of the echo chambers we all inhabit.”

“You are facing fundamental questions that may not fit into 140 characters but are nonetheless vital to our democracy. I think the stakes are really high,” Clinton said. “Too many of our most important debates occur in what I call an evidence-free zone, ideology trumping facts, made-for-cable shout-fests, twitter storms, drowning out substantive dialogue and reporting that often leads to shallower more contentious politics and even no or not the best public policy.” full story:  here

I only wish ole Hilly were a Republican, so she could truly experience the media-zombie-fest on her carcass; but being a Democrat, there is only so far that the ‘media poodles’ will go. She has been a bit spanked but I believe that’s been for one reason. Even the ‘old media’ is a bit sick of the corruption which followers the Clinton’s like a Pied Piper. And that, only because they have to continually defend it. But I also wonder if these untrustworthy, ‘media poodles’ wouldn’t love to see the Marxist Democrat Elizabeth Warren take over the Obama regime and not the aged Hillary.

But if any Republican had been accused of doing, exactly what Hillary Clinton has done (hiding Government property, which the email are and then destroying what they didn’t want the public to know about), that Republican would be zombie food until they were jailed.

Hillary used her private server for one reason — to hide what she was saying and who too. Hiding conversations she had with Middle East regimes, as they donated millions to her. But these kings and dictators did ‘donate’ hundreds of millions to ole Hillary . . . and surely a blind bat would understand they did so expecting something back from this failed Secretary of State, Presidential hopeful.

She ‘joked’ of evidence-free zone, ideology trumping facts, made-for-cable shout-fests, twitter storms…”  Yes, there are “evidence-free zones’ due to her corrupt actions of hiding her email! It does make it more difficult to collect the ‘evidence’ when Clinton controlled the serve and destroyed that evidence. “Ideology trumping facts” . . .   the core of the Liberal Democrats ideology. They never rely on facts, evidence much less truth, but only their radical ideology twisted into a presentation to push an agenda. You never to rarely here a Democrat talking about ethics or morals any more than you’ll see a zombie eating carrot cake. When was the last time we heard a Democrat glowing over their Christian faith or their adherence and love of our Constitution? Perhaps 1890, but I’m not sure.

I’ve come to realize that Democrats, and their voting base — do no care about morals or ethics. If they did, they could never vote for the immoral, corrupt, failed reprobates they place in office.

As for those “made-for-cable shout-fests, twitter storms,..”, this is Hilly’s way of trying to dismiss FNC over the “twitter storm” she herself created!

Hillary Clinton has no accomplishments.  And by accomplishments, I mean those little things we can point to and say, “good job”. She’s an aging woman, whose life long goal has been to be king. She ‘accomplished’ all of that by clinging to the male of the moment: first being the dirty, moral-turpitude-challenged, Impeached Bill Clinton. The other is the loathed Barack Hussein Obama who probably gave her the Secretary of State job out of some bribery laden deal. . .  and the philosophy of ‘keeping your enemies closer’.

In any case, the corrupt Hillary is determined to be king. The only thing standing in her way is the equally corrupt “poodle media” and a weary voting public, who might well be sick of these radical, Democrats and the tyranny we experience the last 6 plus years. Please God, please.