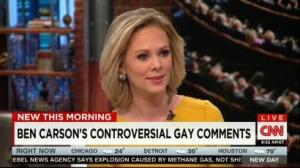 Margaret Hoover, Republican consultant: …[I]t’s hard to give a serious analysis of this. But the truth is, we know Ben Carson is sort of untethered to reality anyway. No person – citizen has run for the U.S. presidency, not having served any other elected office ….. So, there’s no way he was going to be elected to the presidency anyway. But this!…But – but this just demonstrates (Carson’s anti-same-sex “marriage” belief)– I mean, first of all, there’s no data on this. Secondly, this sinks any nomination. If he has looked at any of the polling about where American attitudes are about homosexuality” . . .

HOOVER: His party, by the way, is my party. I am intimately familiar with the Republican base. Fifty percent of Republicans under the age of 50 are in favor of freedom to marry”

Liberals are “untethered” from morality and ethics . . .  provable by who they support, nominate and elect to office.  This can and does include those Liberal Republicans who turn their snotty noses against morality to pursue a Liberal nominees. And please note, that the ‘politically correct’ John Avlon, editor-in-chief of the Daily Beast, refers to this woman as “babe”.  An immediate death sentence, were in invoked by any Republican. No doubt this fall from politically correct graces, will be overlooked by the hypocritical Liberals.

Dr. Ben Carson, who is a self-proclaimed Christian and who converted to Conservative principles some years ago, had the audacity to speak the truth and will receive condemnation for it. As would be expected, since Liberals detest hearing moral standards enunciated.

Without delving into the how’s and what nots’ of homosexual activity, it will suffice to say, it is sin and a learned behavior.  Hoover and the rest can mock, laugh and bemoan all such statements, since this is expected response from the willfully uninformed. She can however,  rightly tout his probable inability to be elected, since there’s little doubt that America has become a morally corrupt nation. But what she shouldn’t do is behave like the town crier for Republicans values . . . . or Biblical ones.

The base of the Republican Party is still Conservatives. They have no where else to go, at present, since there are none welcomed in the Democrat Party.  If the “majority” of youth calling themselves Conservative have no problem with homosexuals marrying, that is further evidence of the decline of America. Years of propaganda and rejection of principles values, will do that to any nation.

Homosexuals can get married by anyone performing a ceremony — but what they really want is  to force government and all other people, to accept and respect their perversion. That can’t be done. Not in a free society. We all have a “right” to our views, but not the “facts”. And the fact is still that marriage is an institution, created by God for one man and one woman. Period.

Genesis 2:22-24  Then the LORD God made a woman from the rib he had taken out of the man, and he brought her to the man. 23 The man said, “This is now bone of my bones and flesh of my flesh; she shall be called ‘woman, ‘ for she was taken out of man.” 24 For this reason a man will leave his father and mother and be united to his wife, and they will become one flesh.

Therefore, Dr. Carson isn’t wrong. He’s certainly isn’t “untethered from reality” nor a Conservative “bigot” who should be flogged by the simple-minded, truth-rejecting Liberal ‘news readers’.  But he will be because he stands on principle. Something rarely if ever found in the devoted Liberal or Democrat.

Immorality and unethical behavior, as well as lawlessness and criminality activity, is not just accepted by Democrats, supporters and voters, it is honored and revered. Otherwise, both of the Clinton’s would have been imprisoned decades ago, instead of becoming Democrat ‘icons’. Sen. Ted Kennedy, too, would have spent many years in prison for leaving the scene of a crime and allowing a woman to drown. And Barack Hussein Obama would have been thrown out of office years ago, by self-respecting Democrats and Republicans for his unlawful, illegal and unconstitutional acts.

Margaret Hoover, as well as the rest of the proud, ignorant Liberals, who diss morals and ethical standards, would serve themselves better if they placed those two elements a little higher on their totem poles.  Referring to this as “freedom to marry” is simply another straw-man argument for the easily distracted and ignorantly uninformed. The morally bankrupt will embrace it because it’s easy and takes no thought . . . nor morals.