Obama’s Continue To Push Their Racist Ideology . . . Grow Up Or Move Out, Folks 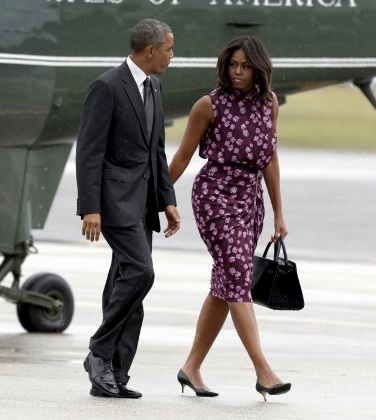 A modern American president lives in a bubble of security, mostly shielded from the rest of the country.

Michelle Obama: “During that wonderfully publicized trip I took to Target, not highly disguised, the only person who came up to me in the store was a woman who asked me to help her take something off a shelf,” Michelle Obama says. “Because she didn’t see me as the first lady, she saw me as someone who could help her. Those kinds of things happen in life. So it isn’t anything new.”

“Barack Obama was a black man that lived on the South Side of Chicago, who had his share of troubles catching cabs,” Michelle Obama tells People. “There’s no black male my age, who’s a professional, who hasn’t come out of a restaurant and is waiting for their car and somebody didn’t hand them their car keys,” Barack Obama adds.

“The small irritations or indignities that we experience are nothing compared to what a previous generation experienced,” Obama says. But more improvement is needed. “It’s one thing for me to be mistaken for a waiter at a gala. It’s another thing for my son to be mistaken for a robber and to be handcuffed, or worse, if he happens to be walking down the street and is dressed the way teenagers dress,” he concluded.  here

I remember years ago when little Michell took her entourage to Target for that  publicly shoot. And we’re  now to believe, with all the camera’s and Secret Service people around, that a shopper didn’t recognize who she was and thought she worked there?  Was she in a Target uniform? Seriously, Michelle?

Honestly, I’ll admit I don’t know, but I am familiar with these two people and their ideological driven ways and I find this a bit hard to believe. What’s not hard to believe, is the fabrications these two spin . . . “if you like your doctor, you can keep your doctor” will ring in infamy, as many other of their glorified, recounts of the past.

But, so what if that did occur? Is it above this woman to help someone who’s short? Are we to surmise that she has a bias against ‘shorties’?  Was the woman . . . o m g, perhaps what Mrs. O expected…. a white bigot in Target?! Or does she just not lower herself to assist anyone, because she’s now a limousine-Liberal snob? Or maybe, it just ‘glorified’ a story for the press.

As I said, I don’t know what, if anything, occurred — just as Michelle has no idea what was in that woman’s head or that it was racist.  But she had to add that to the interview, didn’t she. Poor  little Obama’s. Living in the White House, the most coveted estate in the world, with tons of money, attention and staffers at their fingertips . . . and life is still so hard. (oh puke)

And now we’re to believe little Barack, dressed as a “professional” coming out of a nice restaurant, was mistake for a parking attendant? Perhaps . . . and perhaps not. But personally, I don’t like being “mistaken” for a racist or bigot, just because of my skin color, Mr. and Mrs. O. And little diatribes like this, make life harder for all.

As is decried by Leftist, yes there is still “racism in America” . . . and everywhere else in the entire world.  And much emanates from black Americans who have a chip on their shoulder, like the Obama’s.

I live in a more ‘minority’ community and I confront racist, or prejudiced people, quite often, who have bought into the “poor-me-you’re-a-racist-because-you’re-white propaganda. We see that attitude now in streets across America, as Liberal anarchist repeat and chant lies of which provably . . . never happened. What a shame, when people choose to push a hateful, biased agenda hoisted up from a few sour folks on the Left. Then it spills over and contaminates the honest, hardworking people just trying to get home from work.  The Obama’s don’t help — and don’t want to.

These are “small irritations or indignities that we experience” everyday from you, Mr. Obama.  And the majority of thinking America’s are past weary of your whining and bashing the rest of us.  We’re citizens. We’re Americans.  We’re just trying to our best to get along in life.

So, grow a little thicker skin, will you?  You can simply call it “manning up” and then show some respect for the Office you hold.  It’s not about YOU.  It’s supposed to be about America and what’s best for all citizens, not just those you pick and choose. I don’t expect you’ll do that, as your ideological agenda and propaganda is far more important than one ‘lousy’ country.  But many will be looking forward to the day you leave our White House  —  for good.

Apologies: I should have added this update the other day:  Here is proof ole Michelle changed her story, which she first told on Letterman in 2004 — when she remembered the encounter quite fondly…………… and without “racism”

2 comments on “Obama’s Continue To Push Their Racist Ideology . . . Grow Up Or Move Out, Folks”