As Churchill once said, “Democracy is the worst form of government, except for all the others.” He also said, “The inherent vice of capitalism is the unequal sharing of blessings; the inherent virtue of socialism is the equal sharing of miseries“. True . . . well, except for the “elite” and those connected to Government.  The Castro’s and Stalin’s of the world, always lived quite well.

Here’s a quote from the less-than-brainiac, Michael ‘the communist lover’ Moore: “Capitalism is against the things that we say we believe in – democracy, freedom of choice, fairness. It’s not about any of those things now. It’s about protecting the wealthy and legalizing greed.”  Moore, who by the way, while verbally bashing and mashing capitalism, made a huge, big ole fortune off of the capitalist system. You can decide who the hypocrite is . . and the greedy fool.

I’m not going to debate anyone over the virtues or failings of capitalism — there is NO perfect system. But I do agree, capitalism is the best of the worse. Only blatant, willful blindness would tell someone otherwise.

I’m sick-to-death of hearing whining and complaining about the greedy “1%” and how ‘you’ deserve this and you want that’.  We all want. But want must be decided and controlled by ability to pay and not driven by greed. Then there’s complaint: ‘How am I going to pay for medical care when I can’t afford it’?!  “Medical insurance, is a product to purchase . . . not an entitlement anyone deserves. But there are those who demand a ‘cut of the money pie’. . .   sorry folks, but if  just sit on your caboose and complain, without doing what is necessary to afford the aforementioned, you’re simply a greedy, envious, lazy Taker.

You want to enjoy the goodies only Capitalism can offer, while sticking your greedy fingers in the Socialistic pie, and having Government force money from  other people —- to give to you?! Shame on you and for goodness sake, get some education. No one deserves a thing.  But we are offered opportunity to earn what we desire — under that evil old capitalist system.

The world, for centuries, has been filled with and controlled by ‘well-meaning’, ‘goodie-two-shoes’, ‘bleeding-heart’ Liberal, fascist, and dictatorial regimes.  They gain control because the weak-willed, lazy-of-thought and completely ignorant people want something provided to them.

Kings, Rulers, authorization Dictators and Presidents — will rule over people when allowed.  That has been the Default setting of the world since the fall of man.  And it’s still going on in most of the world.  Up and until very recently though, it wasn’t going on in America.

Some people, we’ll call ‘Conservatives’ , are trying to make sure America doesn’t become another victim on the world stage of Tyrants. The last, mid-term election proved two things: There is hope for America because Obama and the radical Democrats were told NO. Secondly, Americans rejected Obama’s tyranny. 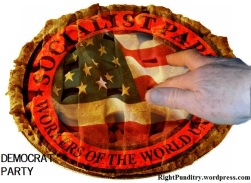 But dear, dear fellow Americans, who are so desperately politically illiterate, get your fingers out of that Socialist pie.  Get off the backs of your neighbor Americans and take care of yourselves.  We’re tired of being told we have to tote you around because  . . . . you don’t want to carry your own weight. What makes you think we have the ability to do so, without unnecessary suffrage? Or do you care, as long as you get yours?

We know you’re capable.  You’ve simply been sold a Bill of Radical Democrat False Goodies, which is nothing  more than hot, intestinal gas. It has no substance because it’s grounded in greedy, selfish behavior, at the expense of others. And the tyrannical minded laugh as they rake in money by controlling you. You are the willing slaves on the Government explanation; Government is the slave owner and you’re the fool who keeps him there.

The hard, cold truth which you obviously reject is this: No one owes you a thing. Not medical care or a doctor.  Not a home or a pot to drop in. You’re not owed food or a shovel.  This is America, whose land was settled by brave souls who never asked, expected, demanded or would have even accepted any of those things, you so greedily demand for free. They fled on non-air-conditioned vessels, to avoid those very sorts of kings and dictators, to take a chance on freedom.  They weren’t afraid to work and do without — they had bigger dreams.  We’re that dream!  We’ve accomplished what they sought.  And now we have lazy, greedy fools telling the rest of us what they WANT without working for it.

Here’s what we want: Shut up. If you hate your life, if you want more, if you need more, if you’re kids need more . . . work for it.  Yep, it’s that hard.  It might take planning and effort, it might take time and energy, it might take support from loved ones, family or friends; but you can do whatever you set your mind to because — THIS IS AMERICA.  Not Cuba or the USSR; it’s not the backwardness of Iran or Syria nor the lazy, gluttons looking to kings and serfs in Great Britain and beyond.

Your duff is for sitting on at the end of the day, if time allows.  It’s not for a lifetime of government handouts.  There are no “government handouts”, entitlements, freebies or “obama phones” — all of that is paid for by unwilling taxpayers who have their sweat equity ripped from their fingers by the Government you love.  Just so it can be reapportioned and handed to you. . . . you think “capitalist are greedy”? Have you looked in the mirror?

American has always been a generous, giving country and no one wants to see others “suffer” or ‘do without’.  Sometimes that might be a necessity to force some people to grow up. But, if citizens had the billions of dollars returned to them, that government has taken and squandered, we could afford to buy every citizen in America a home, phone and a doctor… of our choosing! Governmental theft is one of the biggest challenges we face.  Al Qaeda and ISIS are barbarian butchers but Government tyrants are much closer and ready to consume what we’ve been given for free — personal liberty to live our lives!

Thank a teacher if you can read.  Thank a Veteran or Servicemen if you’re free. Thank God for the America you were given and start counting your blessing.  No one owes you a thing.  But know that your life as an America is a gift from God, who doesn’t care much for complainers.

Here’s the comment from the Posters which began this response:

The ignorance of the voter will be the end of us. But it’s merely just another pinprick in the daunting slaughter of the oligopolistic beast we know as the capitalistic system. Socialism is not the enemy; thought, capitalism is not our true ally. Is it so evil to be able to believe that in America the supposed “land of the free” the people actually have a chance? Am I a criminal for believing that the kinds in Atlanta Public Schools should be apart of a better system that allows them to really be able to compete in world where the “rich” kids are born with a head start? Isn’t that capitalism because it seems like the powers that be (the 1%) are intimidated by a little competition. But I must be the antichrist, to think that the “greatest” country on Earth is willing to take a major step forward by making healthcare available for all “citizens”. I am interested in your opinion on the healthcare systems of Canada, France, and the United Kingdom. Because proper combination of both capitalism and socialism is the only workable system. Why have any social systems? I guess that social security and public schools should be banned too? If I don’t have insurance I should be put out to die at the doorstep of the hospital that can help me. Does that really sound right?
But I digress, the true nature of this debate is the incompetence of our sniveling, childish “leaders” know as the democratic and republican “party”. George Washington (who warned us of this) is turning in his grave to see how the weak democrats and the oblivious republicans watch as the United States falls into a dark time worse than Channey(Bush), Hoover, and Nixon’s administrations combined. Therefore I stand by the fact that these low life, disgusting creatures known as politicians need to grow up and work together before the true enemy of both capitalism and socialism reaper. So please correct Gov. Deal, correct that lunatic Ted Cruz, and help the new senate (which I congratulate y’all on your victory) to get some perspective on the reality of what the real Americans are going through.