AP forced to clarify photo of Mitt Romney bending over in front of schoolgirl.   It was a news photo that, as one US news site quipped, was “ripe for captioning”.

A photo of US Presidential candidate Mitt Romney bending over, while a seemingly astonished schoolgirl stands behind him, mouth agape, Fox News reports.  The photograph, posted by The Associated Press, has since surged across the internet.

The candidate riding a wave of confidence from last week’s debate performance was suddenly made, pardon, the butt of jokes.

So was it a cheap shot?

“It’s unbelievable,” he wrote. “It honestly looks like a little girl is gaping at Romney from behind.”   Read more: here

The AP wasn’t “forced” to clarify nearly enough.  This silly picture was intentionally publish in an attempt, by the biased, liberal press, to make Gov. Mitt Romney appear foolish and to also mislead the pubic on what had transpired.

It also embarrasses a young girl.  Where is their apology to her?

The photo below accurately depicts the surprise (and delight) on the girls face as the Governor chose to take a seat in front of her.

The AP, as the vast majority of our press has no shame and no long attempts to hide their ‘bias for all things liberal Democrat’.  But I wonder how funny and amusing they’d find the photo below?  Is that worthy of a few chuckle on ‘photo captions’, to these propagandist?  Or would it be deemed “racists”, “bigoted” and “unbecoming to a Presidential candidate!”? 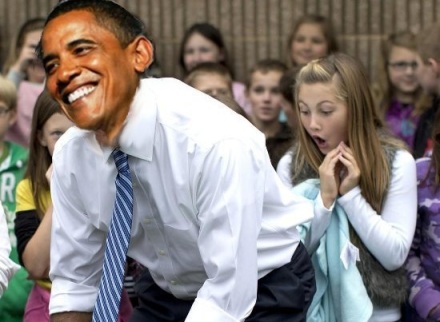